Novembre 2015, In The Hills Magazine

No great leap of imagination is required to suspect that Lego, maker of the wildly popular plastic building bricks for children, helped inspire the founders of BONE Structure, a Montreal home-building company.

But Lego is no longer just for kids. For grownups, the company offers Lego Architecture – kits that enable folks to use the interlocking pieces to build scale models of such renowned buildings as the Louvre Crystal Pyramid and Fallingwater, the Frank Lloyd Wright-designed home in Pennsylvania. The sets even include doors and windows. With time and patience, you too could have a mini Eiffel Tower or Trevi Fountain in your home.

Just like Lego buildings, BONE Structure houses are built with prefabricated elements that literally snap together – though building a BONE Structure home may take less time and patience than putting together an ambitious Lego project. Locally, Caledon Building and Design is an Authorized Builder of BONE Structure homes. Charlie Skuce and Aurora Sweetnam work together in that division of the company. The couple has a kind of missionary zeal about the quality and potential of these homes.

Their belief in the product is so great they built their own 3,000 square-foot BONE Structure country home on the border of Caledon and Erin – to live in, to work in, and as a showcase for the concept.

Both Charlie and Aurora are advocates of modern design and were attracted to BONE Structure for a number of reasons. Charlie, a construction site supervisor and project manager, admires the innovative thinking behind the system and how easily the pieces fit together, which gives the builder a high degree of quality control. He says the framework of his and Aurora’s home, including the garage, went up in three days. Aurora, a talented, self-taught designer, loves the sleek profile and brightness, which make designing the interior an exercise in creativity rather than problem solving. 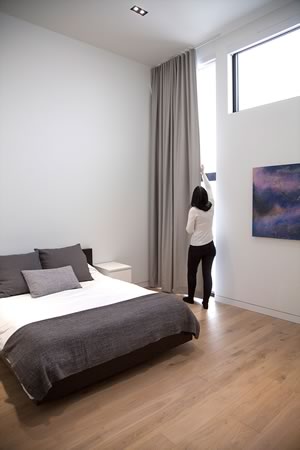 Charlie is convinced this is the way to build strong, environmentally sound and beautiful structures. In planning and implementing the interior design, Aurora was delighted to find nothing she had to work around or hide: no intruding ductwork, no wires tracing their way along corners or baseboards.

A BONE Structure house has three principal characteristics: The frame is made entirely of precut lightweight steel that snaps together; the system is based on a five-by-five grid, which means that posts are five feet apart, windows are five feet wide, and the subfloor is laid in five-foot-square sections; and the structure, which is extremely energy-efficient, meets the highest environmental standards.

The technical innovations are impressive. The steel shell comes punctuated with holes and tracks for all electrical and entertainment systems and ducts. Nothing needs to be drilled. There is no need for nails. Not a drop of solder. Say goodbye to bulkheads. The windows and stairs are designed to snap into the shell. The whole house is insulated with spray-on, soy-based polyurethane foam, and the ceiling is insulated to an R-value of 56. In addition, the floor-to-ceiling windows provide plenty of solar heat. It’s snug! And last but not least, the system uses as much non-toxic material as possible, a boon to both personal and environmental health.

Surprisingly, the five-by-five grid doesn’t limit the creativity of the floor plan, which can be adapted to classical or custom proportions. As with Lego, interior walls snap onto the steel frame, and because these walls are not weight-bearing, they can be placed anywhere. This eliminates the restrictions of the formal five-by-five proportions.

BONE Structure is not a total home solution. The system includes the steel frame, roof, insulation panels, windows, doors, stairs and subfloor. The company also offers a wide range of single- and two-storey designs, although architects can also use the system to create their own designs. As with any custom home, interior finishing must be contracted out. 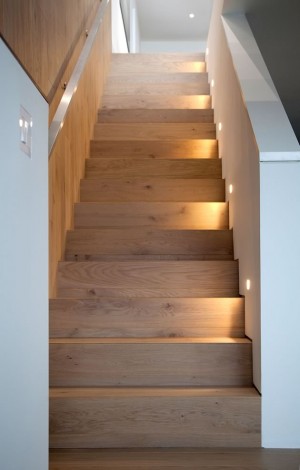 Oak stairs lead to a bright and roomy basement. Photo by Pam Purves.

For their home, Aurora designed a kitchen that features contemporary finishes with working elements that are mostly hidden. A large island anchors the airy central space overlooking a deck fashioned from ipe (pronounced ee-pay, aka Brazilian walnut) and the glass walls provide an unobstructed view of the woods beyond. The black cabinets open at a touch, so no handles or hinges clutter the lines. The honed granite countertop has a narrow, elegant profile and can be used for dining as well as cooking prep.

The floor, which flows without a break from room to room, is engineered hardwood with a light oak veneer. A black, white and beige palette makes the most of the seasonal colours that can be enjoyed through the floor-to-ceiling windows.

The living room is a quiet cul-de-sac separated from the kitchen and dining area by a half wall. Despite the unobstructed view to the outdoors, it is a cozy spot.

The home now has two bedrooms, but adding a few snap-in walls could easily transform it into a four-bedroom plus den. The master bedroom, with its ensuite bath and floor-to-ceiling windows, is on the main level. White panels in the hall maintain the minimalist feel, but open to reveal a powder room and closet.

Larry, the couple’s French bulldog, even has a personally designed bench-cum-bed by the front door so he can comfortably stand guard while his humans are away.

Although BONE Structure homes can be built without a basement, this home has one. It contains a guest bedroom and bathroom, and a large office suite, as well as the usual utilities. But with 10-foot ceilings and a wall and a half of large clerestory windows, this bright space feels like anything but a stereotypical basement.

Charlie and Aurora’s home is part business, all mission and a great pleasure to live in. “I love the clean lines, the light and simplicity of living here – and the lower heating costs!” says Aurora.

Larry says, “Woof, woof, woof,” which means he loves being able to see outside despite his short legs. 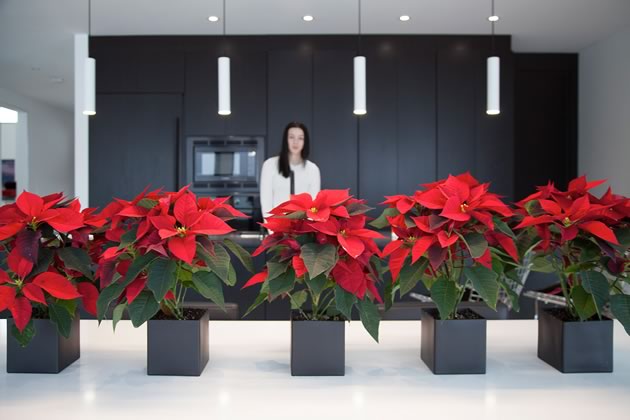 Downlights in the airy kitchen keep light focused on the cookspace. Photo by Pam Purves.