VANCOUVER — It has become a rite of passage for Vancouver homeowners: tolerating disruptive, interminable construction mayhem next door or down the block.

In the case of each of the three dwellings I’ve occupied since moving to Vancouver in the 1980s, adjacent houses either added a second storey or were newly built from the ground up.

Trees got ripped up, bulldozers moved in and noisy work crews created construction havoc morning to night, for a year at a time.

This, of course, won’t do anything to address the loss of character homes on Vancouver’s west side, but it could bring a measure of peace to residential streets.

Marc Bovet, a former Bombardier manager, is expanding his Bone Structure company to B.C. and Alberta. He wants to make home construction more like airplane building.

The nine-year-old firm, with 40 employees working as architects, technologists and engineers, has patented a technology that aims to eliminate the muss and fuss from home construction.

“The philosophy is one of assembly and technology rather than construction,” says Bovet.

“Structures can be put together in less than a week, using only a drill.

No nails, no cutting, no mould and no waste.”

Bone structure technology was inspired, he explains, by “a combination of Lego and Meccano.

“Pieces are simply snapped together.”

The technology uses a recycled steel frame that, the company says, is more stable and earthquake resistant than a traditional wood frame — it won’t rot or warp, and requires no interior load-bearing walls.

Houses are built on a traditional foundation.

Nearly all the company’s work is customized for clients who know upfront about the precise package of materials they’ll require and its cost, with no subsequent surprise budget increases.

Bovet advises the overall cost of a home works out to be five to 10 per cent more than for a traditionally built home but is cheaper to maintain over time.

Writing last month in the publication Realty Times, editor Jim Adair notes steel framing generally has been used for commercial and industrial projects, though Bone Structure, focusing on residential, isn’t the only company of its kind in Canada.

Bovet reports that more than 150 Bone Structure homes have been built in Quebec, where the company has seven manufacturing plants.

Another three plants recently were located in Ontario and now, Bovet is looking to locate another three near Vancouver and hire managers for his B.C. builder network.

The company is constructing a show home in Kelowna. Bovet will neither specify the amount the privately held company is investing in its westward expansion nor how profitable its operations have been, beyond stating it has been “very successful so far.”

Bovet, whose background is in advertising and retailing, believes “our only challenge now is getting ourname and technology out there in a housing market that really hasn’t changed since the turn of the century.”

The residential designs the company showed off on a four-city western tour in late February looked modern.

But Bovet says building plans can be adapted to create more traditional-looking styles that would blend in with older Vancouver neighbourhoods.

“We do sloped roofs as well.”

Of course, in Vancouver, a bigger challenge than finding a good home design or efficient builder has always been locating a lot that’s anywhere near affordable. 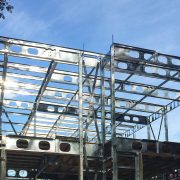 New technology pieces houses together like toys
The house of your dreams in two months? It’s possible, says builder