After more than three decades in her Toronto bungalow amid growing mildew problems in the 1940s-era home, Ruth Wiens decided it was to start fresh.

She still loved her East York neighbourhood, so the IT professional decided to demolish her existing house and build a two-storey, three-bedroom, 2,000-square-foot home from scratch.
But instead of hiring a builder to construct her new home, piece by piece, Ms. Wiens ordered one from a factory, based on a design she saw in a magazine. She didn’t want the harsh Canadian weather to pummel the shell of her home during construction, as her neighbours’ new homes had been over the years.
Ms. Wiens wanted a house that was constructed indoors, under controlled conditions.
“There would never be in an unexpected rainstorm that just soaked everything,” Ms. Wiens said. “And having watched my neighbourhood over the years, I just thought, there are alternatives. You don’t have to be the lucky one that has the two weeks of good weather.”
Most new homes are built stick by stick, brick by brick, by a construction crew on-site, but a growing number of Canadians are buying homes right off the factory floor to be assembled on the lot within days.
However, the stigma of the earlier, shoddy iterations of these prefabricated or modular homes still lingers and the Canadian construction industry is reluctant to change, industry insiders say.
As far back as the 17th century, pre-engineered housing kits were being shipped to North American East Coast ports, but it wasn’t until the late 19th century when ready-made wood frame-houses were first being produced in Nova Scotia, according to the Canada Mortgage and Housing Corporation. It was during the Second World War that the factory-built housing era began, the crown corporation said in the latest Canadian Housing Observer.
Homes needed to be built with as little material as possible in a bid to divert the least amount of resources from the war effort. These factory-built houses were later needed to meet the severe housing shortage when the troops returned home, according to the CHMC.
That image of a prefabricated home as a shoddily built, boxy structure made of poor-quality components, even decades later, is still hard to shake.
“It’s always been labelled as cheap,” said Marc Bovet, founder of Bone Structure, a Quebec-based company which produces homes that can be assembled from several factory built-components without any nails. “It has always been labelled in the U.S. as [for a] trailer park. It’s the label that comes with it, and that has to change.”
This perception has evolved as prefabricated homes give site-built houses a run for their money. The factory-built home of today comes in sleek and airy, energy-efficient designs made of high-end materials and fixtures, he said. In a factory, the company can produce precise, custom components for a more efficient way of building, Mr. Bovet said.
“Compared to wood structure houses out there, we don’t create any garbage… For a 2,500 square foot house, the traditional home construction we have right now in Canada is filling up five of those humongous garbage containers.”
Also, architects are “embracing” industrialized building, says Pieter Venema, president of Wingham, Ont.-based Royal Homes.
“It’s got more of an upscale cache to it,” he said. “People are really beginning to understand the concept and see the benefits of it. It’s slow to change but we do see it.”

One major barrier is the construction industry’s reluctance to change, says Mr. Venema. Plus, homes built in the factory, as opposed to on site, means fewer jobs for construction workers to the chagrin of some unions, he added.
“The industry is traditional, with strong unions and owners who prefer it that way,” he said.
Geography is another big factor, as some regions of the country are more open than others to purchasing an industrialized home.
About 75% of all factory-built, single detached homes were shipped to New Brunswick, Nova Scotia, Alberta and Ontario.
However, in Ontario, factory-built homes are typically purchased in smaller communities and rural settings, rather than urban settings.
“Only in the last five years or so have they made in-roads into urban areas,” Ms. Maynard said. “Before, it was more difficult to transport a great big house into an existing neighbourhood.”
Consumers in rural areas are more likely to be able to purchase a vacant lot, which is difficult to do in established subdivisions, said Mr. Venema.
Industrialized homes are also popular among seniors and empty nesters looking for a smaller house, according to the CMHC.
Another related factor in the growth — and limits to growth — for prefab homes is the cost. Buying a custom home through Royal Homes, depending on the model and interior finishings, can cost about $175-to-$185 per square foot, or roughly $259,000 for a 1,400-square-foot house, without the lot. A home with Bone Structure can cost $250 per square foot, or $350,000 for a 1,400-square-foot home without the lot.
That’s compared to the average purchase price of a home across Canada of $389,199 in December, according to the latest figures from Ottawa-based Canadian Real Estate Association. Whether a modular home is more affordable depends on the bells and whistles, and location.
Mr. Pieter says their custom-built modular homes are “very competitive.”
“Our solution is not a cheaper option, it’s not a more expensive option,” he said. “If you go to a subdivision builder, it’s probably cheaper. But you’re getting a house that’s not customized, and usually not to the same spec as well. It’s just a different type of product.” 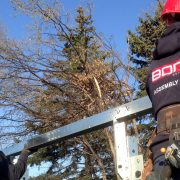 The House That Snaps Together
Faire défiler vers le haut