A butterfly-roofed modern home is rising from the scorched earth of the North Bay fires, bolstered by an innovative, steel-framed design that promises maximum energy efficiency.

“There’s so many people that look at this house and say, ‘Man, that looks like it was by Eichler,'” admits architect Brendan Kelly of his design for the home being built just west of Santa Rosa. “I say, ‘Man, Eichler wasn’t an architect, that was Anshen and Allen!'”

Kelly’s clients on the phoenix-like project are his cousin Merritt Booster and her husband Howard, the latter who recalls vividly those dreadful days of October 2017.

“I sent them away first, then I hung out for a couple more hours,” he said of his wife and father-in-law, now 97, evacuating their home of 33 years just ahead of him the night of October 9. “By the time I walked [back] in at 2 p.m., it was gone.”

Hiking past downed power lines into the 16-home Rolling Oaks subdivision—where their home was one of a dozen destroyed—was a surreal scene. Booster and one neighbor picked through their blackened lots in eerie silence, rudely punctuated by the occasional propane tank exploding in flames on other properties.

“I felt like I was on a movie set on a World War II film set in France,” he recalls with a grim smile. Now, three decades after buying the property in 1984, after raising three daughters there, its time to start over.

“It was three generations on this eight-acre homestead. It was a big loss for everyone,” says Kelly solemnly. The architect was himself embarking on a new start, having opened Kelly-Morgan Architects in Napa last February with wife Kerry Morgan.

“The North Bay fires came right as we came back,” said the former St. Helena resident, who with Morgan is raising their four children in Napa after working as an executive in London and Rome. They too were evacuated in the fires, he said, adding, “I said, ‘I think it’s a sign. We should be architects again.'”

Still another precipitous event for this remarkable project came from a friend of Booster’s telling him about an upcoming demonstration for steel-framed homes. Kelly attended the demonstration by BONE Structure, a Quebec-based design and construction firm that opened a San Francisco office in 2016.

“I guess he grilled them pretty hard,” Booster chortled about Kelly, who already had a modern design that wouldn’t work with BONE pre-cut plywood roofing and pre-cut polystyrene paneling, which is said to help achieve zero net energy (ZNE).

“He went from being a skeptic to being an evangelist,” said Booster, 67, a retired computer engineer whose wife trained teachers in Santa Rosa. “He called and said, ‘We gotta do this!'”

The building team of Kelly and Mike Dehlefsen of Mikara Construction worked to connect the Sonoma County permit officials with BONE engineers. The result was a permit in less than a month compared to the long wait before the fires, Booster said.

“I just like the idea, the precision and the strength of a steel structure,” he said of his decision to build with BONE. With regard to the energy efficiency, he added, “Whatever we were going to do, we were going to be headed in that direction…The BONE system makes for a very tight house.”

A BONE press release put it this way: “In a place that has been devastated by a combination of mismanaged lands and unprecedented conditions undeniably fueled by climate change, it seems fitting the Boosters will be able to create a zero-energy home here that will be fully solar-powered and can be a model for anyone wanting to move away from fossil fuel.”

Possibly even more important in building what Booster called “a family asset for the future” is the fact that “the interior walls are not structural.”

“It gives flexibility to do things that are interesting that pop up that you didn’t think of,” enthused the retired engineer, who is grading the lot himself and also opted for a BONE structure for a detached garage.

“It’s nothing like what was here before,” he recalled of his old 2,700-square-foot, California ranch-style home, which is being supplanted by a much larger one.

Booster’s hobby is metalwork, so as the family lives in trailers onsite awaiting completion of the home, he contemplates uses for the small piles of melted metal he found in the ruins of their old home—puddled aluminum wheels from his Miata and gnarled formations from a family silver collection. He plans to hang them in the house along with a salvaged section of their 1913 piano.

From these strange sculptures courtesy of nature’s fury, along with innovative modern home design, the family will forge a new lifestyle from the ashes.

Learn more about this project and the story behind it here! 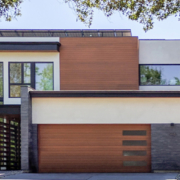 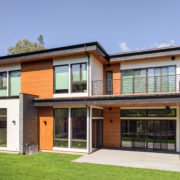