Blog
You are here: Home1 / Blog2 / News3 / Press Reviews4 / Spurring a manufacturing boom in Quebec could take more than just a weak...

MONTREAL – For BONE Structure, a Laval, Que.-based home designer and builder, the U.S. building permits it expects in the coming days are arriving at the right time with the Canadian dollar at a six-year low.

The company has contracts to put up buildings in California and Texas, but all the pieces will be manufactured in Canada, then shipped south to be assembled onsite.

With the Canadian dollar pushed even lower after yet another Bank of Canada interest rate cut on Wednesday, and combined with a year-long slump in oil prices, some have predicted an economic shift away from the energy-producing West, and towards the country’s eastern manufacturing centres.

While these external factors may position Quebec to take advantage of the strong U.S. market, the province still exports less on average than other provinces and has not seen a manufacturing boom.

“Could Quebec do better? The answer is yes,” said Véronique Proulx, public affairs and strategy director at the Quebec Manufacturers and Exporters Association. “There is a lot of opportunity in the future for the manufacturing sector, but Quebec can and must become an export economy.”

The latest numbers from Statistics Canada show that in May, manufacturing sales in Quebec did rise by 2.2 per cent to just over $11.9 billion, the second gain for the province in 2015. Higher production in the aerospace industry was mainly responsible for the growth, with production up 8.9 per cent compared with the same period in 2014.

This increase hasn’t appeared to translate into more employment, though a quarter of the province’s GDP and one out of five jobs depends on the manufacturing sector.

In June, employment in Quebec decreased by 33,000 — all in part-time work — pushing the unemployment rate up 0.4 per cent to eight per cent. Until last month, employment had been trending upward since December 2014.

Proulx says that in order for Quebec to create more manufacturing jobs and then export the products, it’s going to take a stronger workforce and government investment.

“We have to make sure we have a qualified workforce and this is really an issue in Quebec. We need the right people coming in [from other countries] at the right time and also having students being trained for the manufacturing sector,” said Proulx.

Canada does benefit from free-trade agreements with the U.S., but some experts say that may not be enough to set Quebec manufacturers apart.

“We’re not the only ones who have had a devaluation against the American dollar. Other countries, specifically Mexico and Europe, also have that advantage,” said Stéphane Forget, vice-president of economic affairs at the Federation of Chambers of Commerce of Quebec. “If we want our enterprises to develop, be more productive and more competitive, we have to invest in innovation and equipment.”

Bovet at BONE Structure also thinks it’s a gamble to rely on a favourable currency exchange as the basis for a successful business.

“Maybe you’ll be fortunate to export in the U.S. or somewhere else, but you’re just fooling yourself because that can revert at any point in time and that is something that is not in your control,” he said. 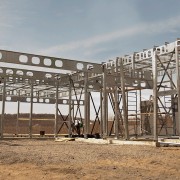 A house built from a steel structure
Scroll to top