A Quebec-based company that’s pioneering the use of recycled steel frames that snap together in building construction is assembling its first home in Calgary.

BONE Structure says its buildings can be assembled in less than a week using only a drill, with no nails, cutting or waste as the lightweight frames are connected similar to Lego.

The first foray into Calgary is on Bow Crescent N.W. where the previous home on the site was destroyed due to the devastating flood along the Bow River in the summer of 2013.

Marc Bovet, the company’s president, told the Herald that there are commitments for 24 homes in Calgary, four in Edmonton and three in other areas of the province.

“The BONE Structure prevails in the case of another flood . . . It’s a pretty impressive house. The structure pretty much went up in five or six days.”

In a BONE home, electrical, plumbing, heating and ventilation systems are easily connected thanks to pre-cut openings acting as veritable “highways” within the structure, just like an airplane fuselage, said Bovet.

Each custom, tailor‐made building has a specific number of screws and parts, taking the guesswork out of ordering, and eliminates unwanted budget increases, he added. 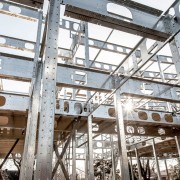