THERE’S A NEW BUILDING MATERIAL IN TOWN. IT’S CALLED BONE STRUCTURE, AND ITS QUEBEC-BASED PROGENITORS ARE COLOURFULLY ENTHUSIASTIC ABOUT IT. 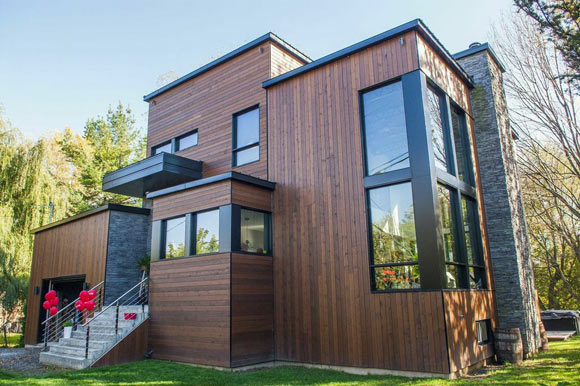 “In addition to being environmentally friendly and energy efficient,” their press release says upon the introduction of BONE to the Toronto market, “the BONE Structure system promotes the development of local economies and gives free rein to clients’ and architects’ creativity by making it easy to form vast spaces with variable volumes and grandiose fenestration.”

I’m guessing that was written by president and founder, Marc Bovet, based on the tone and timbre of our quick talk.

“I have been in different trades,” he says, talking about what got him into the building business. “I was born and raised in retail, probably even conceived behind a counter.

“I’m not an engineer, not an architect, not a handyman, I do not wear a tool belt on the weekends. In 2004, I bought a property, a 1942 house, the paint was original, even the phone was Northern Atlantic. People tell me I’m compulsive. I hired a master carpenter. It went way over schedule and I ended up in a hotel room with my wife and four kids for two weeks.”

He says the experience left him “pissed off,” and he went in search of a better way to fix your home.

After reading and travelling and consulting with his old colleagues at Bombardier, where he used to work in management, he came up with BONE Structure, made of recycled materials, and put together in what he compares to Meccano, for those old enough to remember it, or Lego for those who aren’t.

Standardized parts, made of 40- to 60 per cent recycled steel into 11-gauge galvanized steel, mean as much as 1,000 square feet of home can be put up per day by four or five builders using a single tool (an impact drill). “There’s no cutting, no piercing, no welding, no garbage on our construction site,” Bovet says. There are also no load-bearing interior walls, meaning houses built with Bone are easily alterable.

“Your kids, they leave home at 28 if everything goes well,” he says. “You can knock down the walls, and put them back up when they come back at the age of 32.”

The system, he says, has been patented in 42 countries.