Most house tours offer an opportunity to check out picture-perfect interior designs and architecture.

At this weekend’s tours of California’s first BONE Structure prefab home on the Stanford University campus, visitors will be exposed to anything but the latest interior finishes and are advised to wear closed shoes: They will be touring the construction zone of a steel-beamed prefab house shipped down from Canada — its bones still exposed as design company BONE Structure finishes its assembly.

The tours will provide a peek at the inner workings of this ultra energy-efficient home.

Homeowner Mark Jacobson, professor of civil and environmental engineering and director of Stanford’s Atmosphere and Energy Program, didn’t just want to build a highly energy-efficient home; he wanted it to be self-sustaining and truly net zero.

And he wanted an all-electric home that uses no gas for heating, cooking — or even barbecuing — so as to produce as little air pollution as possible from his home.

He also sought a strong, durable structure that could withstand a major earthquake, as well as termites or mold. So he turned to BONE Structure, a company that customizes steel, prefab homes.

Key elements to the home’s self-reliance are the solar panels on the roof, where electricity will be produced and stored in a Tesla lithium battery. The panels will produce enough electricity to power the entire house plus two cars. At times, they will produce more energy than the household needs and give back to the university’s utilities grid, potentially helping to prevent blackouts, he said.

Most of the prefab homes that Jacobson researched offered very little flexibility in placement on his funny-shaped lot at the top of a cul-de-sac. Although BONE Structure homes are prefab, “You can put them in any configuration. That was appealing,” he said.

The prefab pieces, which were manufactured from recycled steel in Canada, arrived in one truckload. Once the foundation was laid, it took just a few weeks to build the shell, cutting overall construction time by months. A local contractor, Wilkinson Construction of San Mateo, is completing the 3,000-square-foot home, which should be ready for move into by late October, Jacobson said.

On the tour, visitors will be able to see how the steel beams and columns are connected using one battery-operated screwdriver, which Charles Bovet, BONE Structure’s vice president of operations for the U.S., compared to a giant “mechano-erector set.” Horizontal steel pieces snap into place; these will support the interior finishes, including Sheetrock or tile. 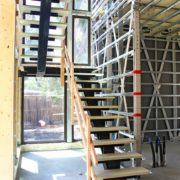 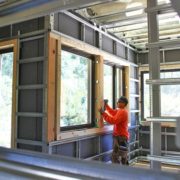 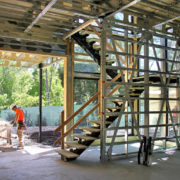 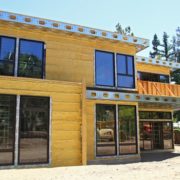 The pieces are “heavily engineered. All components are laser cut,” Bovet said, noting that they use a patented “ankle” that allows some wiggle room in fitting those precisely cut components into the poured-concrete foundation.

Each BONE Structure house is custom-designed and built with modular components, with no interior bearing walls. That construction adapts well to modern homes with great rooms. It even allows for future adaptability, Bovet said, in which one could simply cut out the insulation on an exterior wall and add a window — “not even a weekend project,” he added. Or, one can reconfigure interior walls as homeowners’ needs change over time.

To build the prefab home, Jacobson had to go through the same steps as for conventional construction: meeting setback requirements, notifying neighbors, interviewing contractors, gaining approval from Santa Clara County (because the house is on the Stanford campus).

The construction cost for a BONE Structure home begins at about $275 per square foot, Bovet said, and will vary with the custom finishes. He estimated the finished cost of the Jacobson home at “north of $400” per square foot.

The Jacobson house is the first that BONE Structure is completing in California, although there are 17 others in the pipeline, including one in Palo Alto and another in Menlo Park. Since the company was founded in 2005, it has constructed 250 homes. Ultimately, the company plans to create manufacturing centers within 100 miles of its projects rather than shipping from Canada, Bovet said. 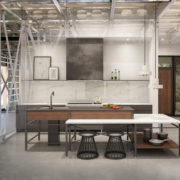