Although Joe Eichler was New York City born and bred, to achieve his vision of modernism for the masses, he moved west to Northern California and built his considerable enterprise.

And although BONE Structure has been building scores of steel-framed, zero-net energy (ZNE) houses in Canada for a decade, the innovative company may also have found its new home away from home in the Bay Area. 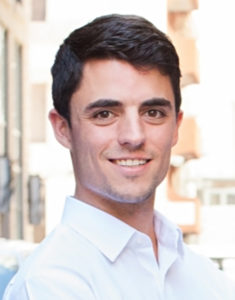 “It made so much sense with everything I was seeing here,” said Charles Bovet, vice president of business development for BONE Structure, which opened its first U.S. office this month at 2nd and Mission streets in San Francisco. “With California everyone is, especially in the Bay Area, more forward-thinking.”

A public informational session about the company is scheduled for 6:30 p.m. on Wednesday June 1 at the University Club of Palo Alto.

Bovet himself moved to California as a Stanford student earning his Masters in Civil and Environmental Engineering and Construction. A few years before, in 2005, his father Marc A. Bovet had founded BONE Structure in Laval, Quebec after a frustrating construction experience.

“We thought the way the human body is constructed is pretty incredible. Everyone has 206 bones,” Charles said of the company name, which is not an acronym (despite capitalization). “We wanted to detach ourselves from pre-fab.”

The homes are assembled using a single type of self-tapping screw to bond laser-cut steel components, not dissimilar, said Bovet, from the classic Erector Set toys. The company offers training in their construction methods for builders.

Its capacity to be ZNE is due to three aspects: pre-cut, polystyrene wall panels; pre-cut plywood roofing with foam insulation; and foam roofing topped by a layer of polyurethane. Add some solar panels up top, and the house can actually be a net-energy producer.

Under construction with steel framing.

“We’ve done more than 200 homes, all of them completely different, but the parts are the same,” said Bovet. “And then you can dress it up however you want.”

Including, of course, aspects of modern design.

“If you want to build an Eichler or other mid-century modern, you’ll have to have some steel and some engineered beams,” he noted. “All of post-and-beam makes a lot of sense for us.”

“Now, with Title 24, it is hard for architects to meet the requirements,” he said of modernism. He noted that BONE Structure’s steel framing decreases the need for load-bearing walls and accommodates open floor plans. “We were designed to be in these types of projects.”

Additionally, the product’s energy efficiency allows for plenty of glass walls, doors, and windows, as well as being ahead of the curve of the California mandate for all new homes to be ZNE after 2020.

“It gives you a lot of flexibility in how you configure the space inside,” said Bovet with that friendly and distinct Canadian intonation. “Arguably, you can do something crazy…We don’t really believe in one size fits all.”

Similarly, he added, “We don’t want to be attached to one style of architecture…In Canada [for example], because of the snow [load], it’s hard to have a flat roof.”

The company is currently building its first California home, on the Stanford campus, for one of Bovet’s professors, climate and energy scientist Mark Z. Jacobson. Its next two projects are set for Half Moon Bay and the Oakland hills, while most of the 15 others in the works are on the Peninsula.

“The California market has been above expectations for us,” Bovet said happily. Not that this came as a surprise to him, he said, while comparing BONE Structure with another local success, Tesla. “When I think about it, it really is more of that in terms of the type of client we attract.

Stanford Professor’s Unusual Prefab Home Is Made of Steel

Follow Us | Suivez-nous
BONE Structure settles in the United States