Blog
You are here: Home1 / Blog2 / News3 / Press Reviews4 / BONE Structure Homes Have A Roof Over Your Head In 4 DAYS

Why wait to build a home when you can assemble it in as few as four days, with little more than a drill?

That’s Laval, Que.-based builder Marc Bovet’s mantra. He’s the founder of BONE Structure, a company that specializes in snapping together homes using steel frames with as few tools as possible.

They require no nails, nor cutting. But plenty of assembly is required.

Bovet’s homes are growing increasingly popular across Canada. The company built its first home in Ontario in January and is eyeing expansion next year with plans for three manufacturing plants in Alberta and two in British Columbia.

The frames also allow for the installation of over 100 windows, which open up on to surrounding environments and bring light into the home.

The structures bear some similarity to prefabricated (prefab) homes, which are built off-site and assembled later.

But Bovet eschews that label, telling the Financial Post that prefab homes have “always been labelled as cheap.”

“It has always been labelled in the U.S. as [for a] trailer park. It’s the label that comes with it, and that has to change,” he said.

To acquire a home, you first choose from one of several models. The company then starts building frames and other components such as panels, windows and doors in a plant. At this time, you also clear and prepare the building site with the foundation. The process takes about six to eight weeks.

Then, the assembly begins on site. BONE Structure estimates this stage to take anywhere from two to three weeks, but that can vary. A video on the company’s site shows a 3,000-square-foot home being assembled in four days with a first-time crew.

Finally, you install plumbing, insulation and electricity through the pre-cut highways in the infrastructure.

Bone Structure’s homes are a hit with Patrick Skuce, who owns the Caledon, Ont. property where the company built its first home in the province, the Post reported.

“These homes are different and fit any lifestyle,” he said. “Because no wood framing is used, three’s no chance for mold, mildew or rot to set in. It’s virtually maintenance free.” 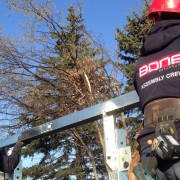 Follow Us | Suivez-nous
It’s a snap: An open-concept home that can be built in four days? It’s here,...

BONE Structure & Eco-Nature are stealing the show at the 33rd Gala Dun...
Scroll to top