Blog
You are here: Home1 / Blog2 / Articles3 / Project Planning4 / Construction Methods: What are your options?

When it comes to building a home, the list of available construction methods ranges from well-known and widely used, such as stick-built homes made of wood, to techniques steadily gaining popularity like light-gauge steel-framing, to age-old methods like earthen-block construction and masonry that are used in specialty projects.

How do you choose the material and building method that best suits your needs? Let’s first get to know the basics behind the most common building practices.

Most buildings (both residential and commercial) are built around a frame that provides the structure and support for the building. Framing typically falls into two categories – heavy framing and light framing – with light framing used in the majority of residential buildings.

Heavy framing includes construction methods such as post-and-beam construction, also known as timber framing, where large, heavy timber beams are used instead of dimensional lumber (wood cut to standardized dimensions such as 2×4, 2×6, etc.), and heavy steel framing that is normally seen in skyscrapers and other large commercial buildings. Light framing is typically done using dimensional lumber or light-gauge steel, with the building’s structural skeleton of wood or steel components assembled piece by piece.

Other construction methods such as masonry (building with individual stones or bricks held together by mortar), reinforced or unreinforced concrete (a material made from a mixture of gravel, sand, cement and water), rammed-earth blocks (building blocks made of compressed earth), and Structural insulated panels (SIPs) (sandwich panels with engineered wood on two sides and insulation in between) can be used independently or in conjunction with frames to build homes, but most of these methods are used in tandem with a frame in the US and Canada.

Commonly-used residential construction methods – how do they work?

Far and away the most common way to build a home in Canada and the US is using “platform” or “stick” framing, also known as “stick-built”. Platform framing uses individual pieces of dimensional lumber (further customized on site to the exact required size) which are assembled piece by piece to form the frame of a home. With this building method the platform or foundation is built first, followed by the walls of the first level of the home (created with vertical pieces of lumber), and then an additional platform for the second-story floor with the walls of the second-story anchored into the second platform. The entire framed structure typically sits on a concrete foundation, which is put in place before building commences. The wooden frame is built entirely on site, piece by piece.

Platform framing requires studs (vertical 2x4s), to be placed every 12, 16, or 24 inches to make up the walls. Evenly-placed studs ensure that walls designed to act as structural supports can bear the weight they need to carry, but do put limitations on elements such as the number and size of windows in a home, and the length of open spans within the structure.

After the frame has been completed, wiring, insulation and paneling are put in place, followed by the finishing exterior and interior elements. 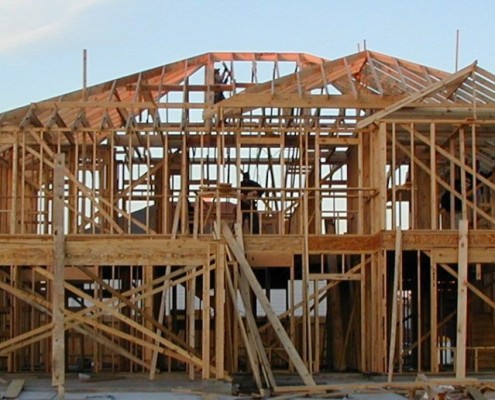 Engineered Wood Products (EWPs), materials manufactured by binding particles, fibers or veneers of wood together with adhesives, are often used in framed home construction. The most commonly known and used EWPs include plywood and oriented strand board (OSB); often these wood panels are attached to the studs of a framed wall to provide additional structural support and the surfaces for walls. EWPs can also come in the form of engineered posts and beams that are stronger than beams cut from timber, and are used for specialty projects.

Another form of EWPs are Structural insulated panels (SIPs) – panels made of an inner layer of insulating foam core sandwiched between two sheets of EWPs, typically OSBs. SIP panels can be used to cover a home’s framing, but can also be used in place of a frame, making up the entire structural support of a home. Their strength and size can provide advantages over standard platform framing for certain types of home design.

Steel has been used in construction since the 19th century, most widely for commercial buildings. There are two types of steel – “hot-rolled” and “cold-formed”. Hot-rolled steel (sometimes “structural steel”) is produced in an industrial process using high heat. The beams and columns produced are very strong, but also very thick; this type of steel is most often used to construct commercial buildings, but these beams are also used sparingly in high-end residential projects that have large spans requiring the added strength of steel “I-beams”. Hot-rolled steel is expensive, making it cost-prohibitive for most residential projects.

Cold-formed steel, also commonly known as light-gauge steel, is also incredibly strong but has the added benefit of being able to be formed into much thinner pieces. Cold-formed steel can be folded, punched and laser-cut, allowing for more precision and customization. Steel-framed homes are built in a similar way to platform-framed wood homes – individual steel beams are assembled on-site, piece by piece, to form the skeleton structure of the building. The biggest difference between wood platform framing and steel framing on the construction site is the amount of on-site customization required. With wood framing, dimensional lumber is cut to fit at the job site, whereas steel components are precisely sized during production at an off-site factory, meaning less work is required on the construction site. 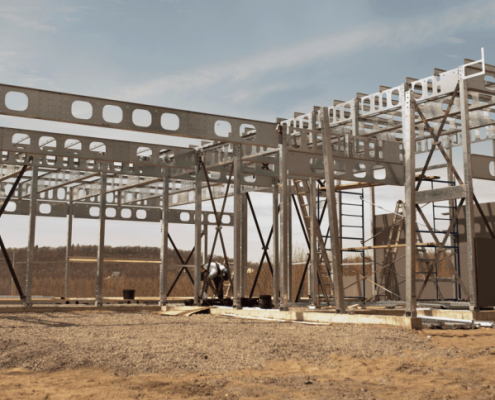 Additionally, there is greater flexibility with the design process as opposed to platform frames, as steel allows for greater spacing in between vertical studs, larger open spans, and other design elements that require more structural strength than dimensional lumber can provide. BONE Structure steel construction system website to view the endless possibilities of using a steel structure for your home or light commercial project.

Concrete is often used in commercial buildings and civil engineering projects, but much less commonly used in residential home construction. The strength of concrete (a mix of cement and water plus an aggregate such as sand or stone) means it can support a great deal of weight, especially when reinforced through embedded steel bars known as rebar.

Insulating concrete forms (ICFs) are used for home construction in certain areas of the US, and are made by pouring concrete in between rigid panels, often made out of polystyrene foam. Rebar can provide additional strength internally, and the exterior panels remain in place once the concrete sets.

There are other, lesser-used home construction methods that are sometimes chosen by home builders for their specific properties or aesthetics. Masonry, either with brick, stone or concrete, was traditionally used as a stand-alone construction method, but today is most often used in construction jointly with a wood frame, with a layer of brick or stone added to the frame as a veneer. Rammed earth construction uses layers of compressed earth blocks to form the structure of a home, and is commonly used in areas where wood is scarce and climates are dry, such as the American Southwest. As mentioned earlier, SIP panels have been used in place of a wood-stick or steel frame, making up the support structure in addition to walls and ceilings. 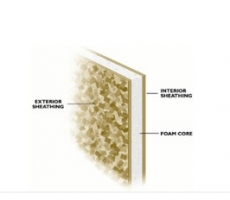 Wood framing continues to reign supreme as the most popular building method for residential construction, but other techniques are becoming more widely used. Each of the different construction methods has its own benefits, and most homes utilize a combination of techniques and materials to produce a comfortable environment customized for the home owner.

Look out for the post “What are the pros and cons of the different construction methods?” to learn more about the merits and downsides of each of these options.

Follow Us | Suivez-nous
Why should I choose large windows for my home?

What are the pros and cons of each construction method?
Scroll to top