Hidden in Mid-Wilshire is an enchanting eight-street enclave called Brookside. True to its name, the tree-lined community is set apart by the flowing water feature that runs from the Hollywood Hills through the neighborhood and out to Ballona Creek. While most of the classical homes in this neighborhood celebrate the creek with garden features and backyard bridges, architect Dan Brunn chose to do something radically different.

He built his home over the brook.

Brunn was inspired by the long motor court at Breakers, the Vanderbilt family’s waterfront home in Newport, R.I., which the 41-year-old saw while on a trip. 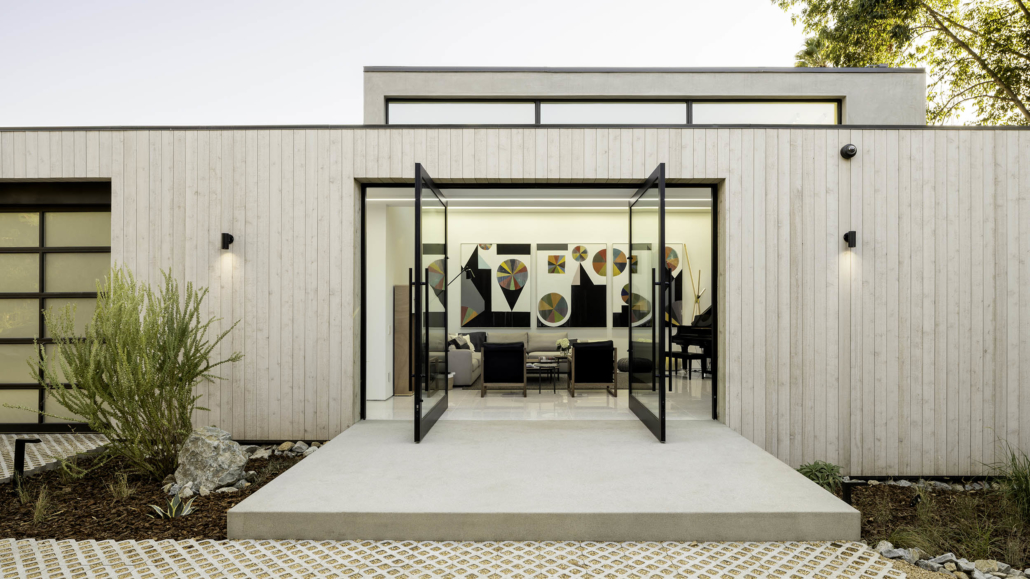 A few days after returning to Los Angeles, he dreamed up his radical plan: an impossibly and beautifully elongated home that would bridge the two sides of the deep property divided by a brook. It was a daring move and one that Brunn didn’t set out to do. He originally set out to remodel the existing home after purchasing it, but his discovery that the foundation wasn’t as good as he thought opened the opportunity to think differently. In keeping with his principles, Brunn was determined to build to zero net energy standards.

He would honor nature by building a home that made full use of the water, the sun and the land.

This eco-consciousness was something Brunn grew up with. As a child in Tel Aviv, his showers were fueled by a passive-energy water heater. “All it was was a tank on the roof painted black and a pipe that wove back and forth toward the house like pasta, so [the water] would be exposed to a lot of sun,” he explained. Although there was always plenty of water on tap, he said that growing up in Israel, where water continues to be a major political issue, made him aware of how precious natural resources are, and he carries that awareness with him today.

Brunn’s home is long but narrow — like a fallen tree that forms a natural bridge over water. 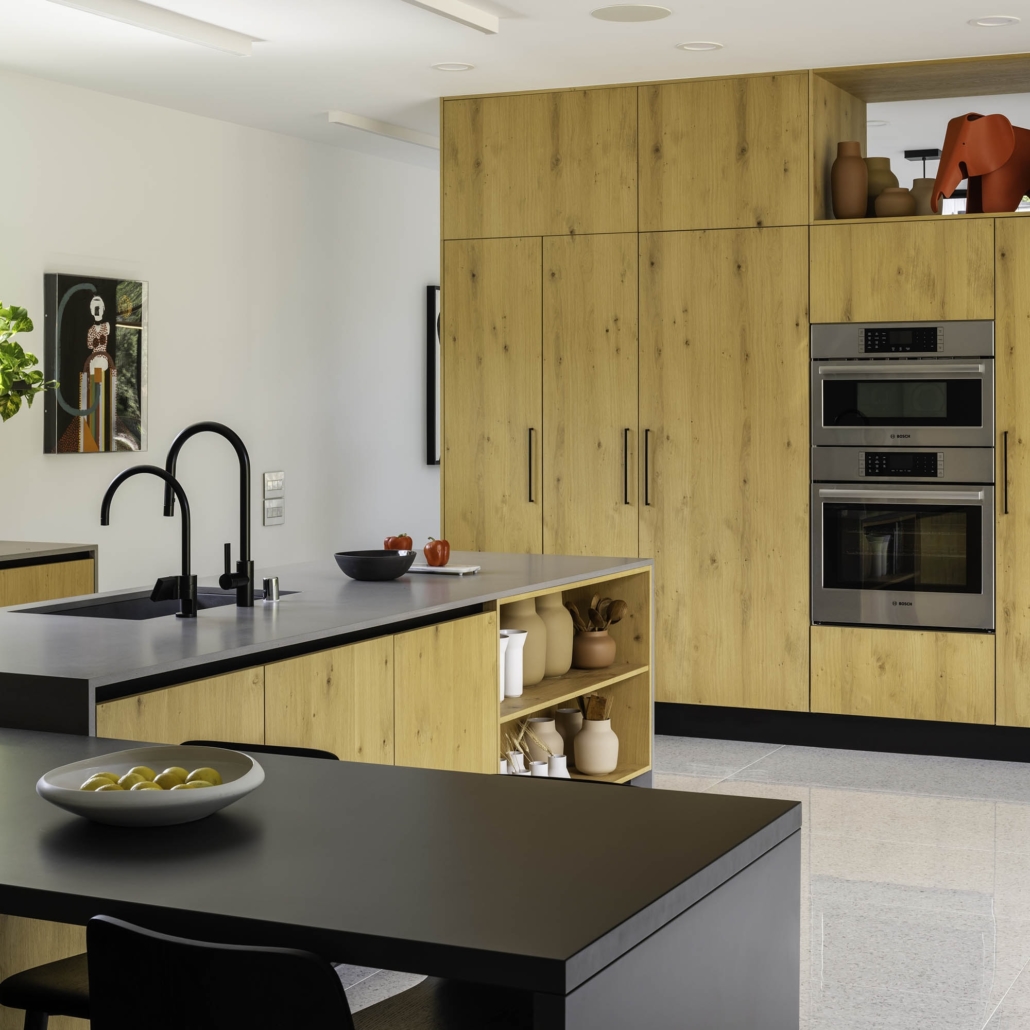 It is spacious, at 4,500 square feet, but a mere 20 feet wide throughout, with a third of the living space suspended directly over the brook. From an architectural standpoint, that is a large gap to surmount. Brunn credits two heavy steel beams and Bone Structure, a lightweight modular steel structural system from Canada, for helping him achieve his plan while still being environmentally friendly. (Bone Structure is made of 89% recycled material and produces minimal waste on a building site.)

Inside, the home is arranged in an elegant manner, with one space flowing into the next in a linear fashion: The living room flows into the kitchen, then the dining area and then an outdoor terrace, all connected by a northern corridor. From there, a southern corridor forms the spine for more private areas, including a den, three bedrooms and two bathrooms. The hallways ends in the master suite, which has its own, private garden. An exit on the southern hallway leads to an outdoor, solar-heated infinity pool and a lower-floor pool house outfitted with a kitchen, outdoor shower, outdoor grill and a music room.

Not only did the structural system help Brunn realize the four-bedroom, 4½-bathroom home but, because of the precision of its construction, it also produced a highly insulated interior space, which keeps temperatures relatively stable year-round, requiring less energy to warm the home during winter and cool it during summer. 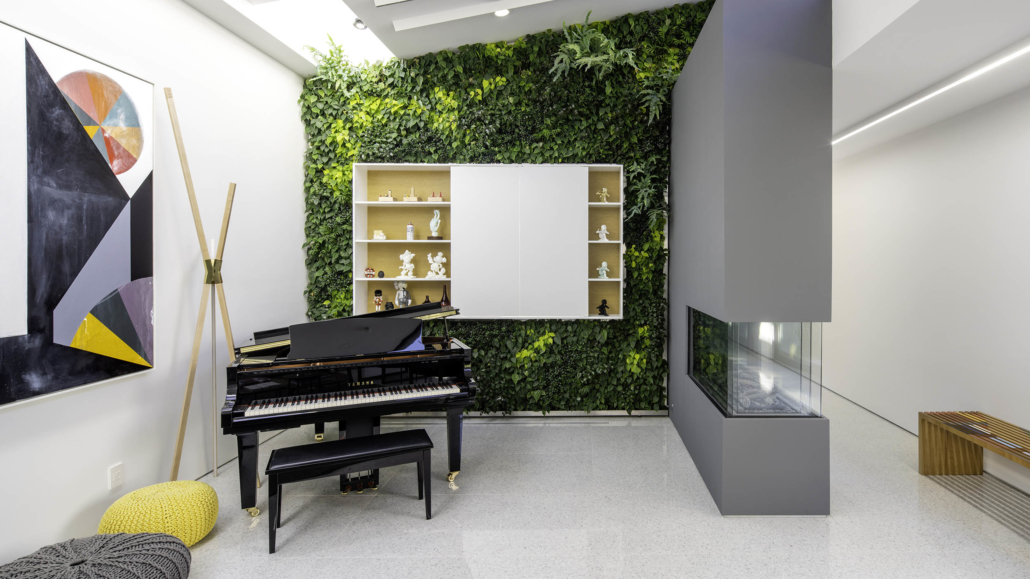 Brunn incorporated as many environmentally conscious touches as possible into the design. His most significant efforts are the ones that are largely invisible.

“One of the things I’ve learned about zero net energy [construction] is that the biggest issue is actually user error. As an architect, you can design the best place possible, but if the homeowner uses it incorrectly, it’s gone,” Brunn said. “Here, inherently, you don’t have to do anything. Because of the passive qualities, it just works.”

Brunn arranged the home with the sun and land in mind. His care is seen throughout the home, in the solar panel system on the roof but also in the windows and their placement. All windows use Western Window Systems’ thermally broken aluminum and dual-pane low-E glass.The home’s major windows face north, which allow less heat gain while letting in a generous amount of light, decreasing energy consumption for artificial cooling and lighting.

Further on, a floor-to-ceiling window by the kitchen and dining areas affords views of the land descending toward the brook.

The only exception to the architect’s rule is a large south-facing window that sits outside the master suite’s doorway. It’s there so that in the morning, as Brunn gets out of bed, he is greeted by a naturally warmed floor beneath his feet. 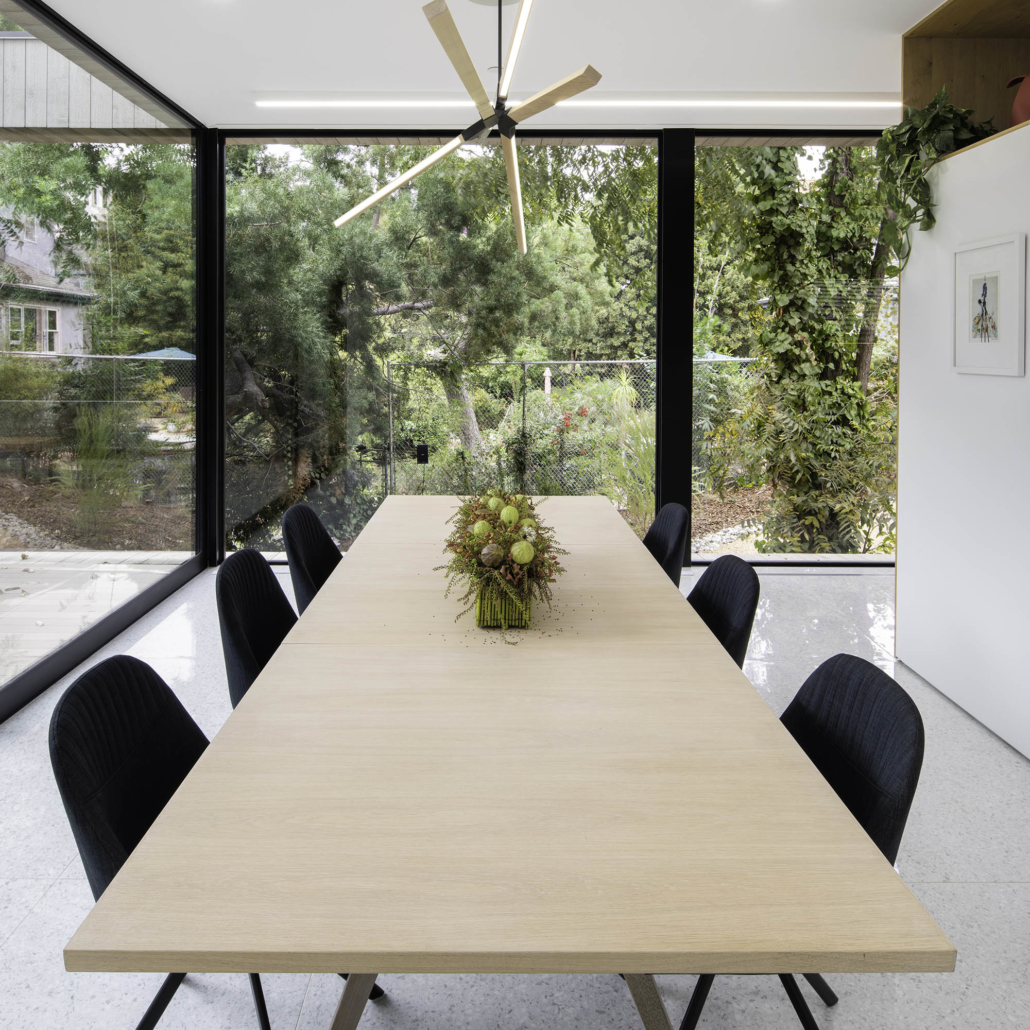 Other windows throughout the home create what Brunn calls his “free art”: a layered landscape of wilderness outside. Unlike many prim and proper gardens, Brunn’s is made to feel as if it naturally belongs there. He recruited his graduate school colleague Julia Segal Shuart of Segal Shuart Landscape Architects to bring in lush greenery that would blend into the existing landscape. 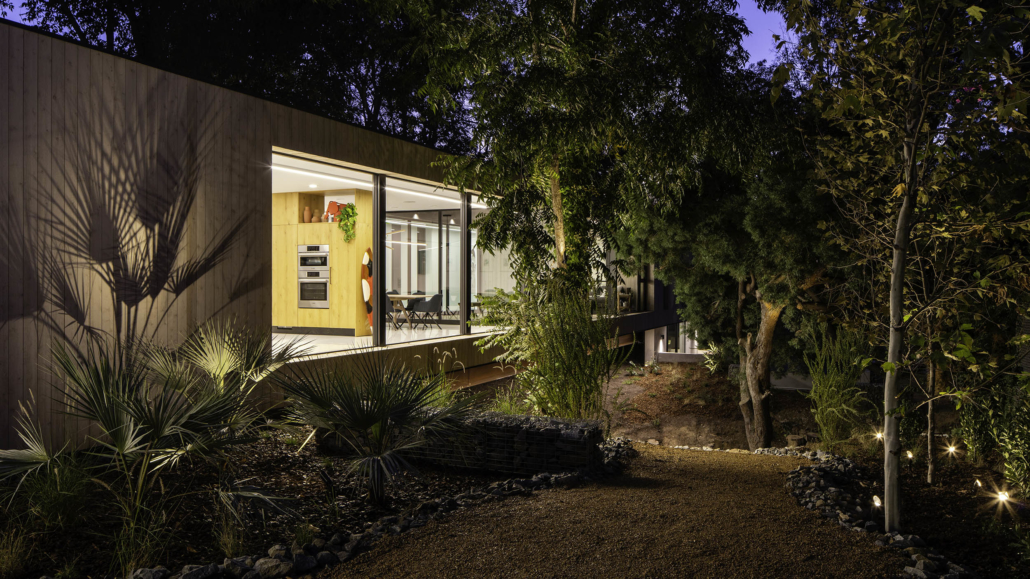 Segal Shuart added native and adapted shrubs and trees such as Epilobium californicum (California fuschia), Eschscholzia californica (California poppy), Muhlenbergia rigens (deer grass), Ceanothus (California lilac), Platanus racemosa (Western sycamore) and Cercis occidentalis (Western redbud) to the landscape. The drought-tolerant plant palette she used needs only drip irrigation (a system invented in Israel, Brunn pointed out) to become established. Existing bamboo and mature trees were kept on the property, while new ones were added to frame views and add more privacy. Decomposed granite, rocks and gabions were added in larger areas to create open spaces and to reduce water needs on the site.

He installed a Pentair reverse osmosis water system in the home, which filters out chlorine, lead and volatile organic chemicals in his drinking water, so he and his guests can drink water straight from the tap. The home’s Quatreau smart faucet also can produce chilled, sparkling or hot water out of the tap. No plastic water bottles are ever needed, said the architect, who knows that water bottle waste has huge consequences for the environment.

Brunn also installed a Pentair whole-house filtration system through the home’s main water line. The system filters out minerals, reducing hardness, iron staining and buildup. “I used to have to squeegee after I take a shower [in my previous home], but now nothing,” Brunn raved. “No water spots.”

Outside, custom-made permeable pavers from Concrete Collaborative on the property’s long driveway filter water through the soil, helping to naturally clean rainwater before it reaches the water table. The home’s rainwater harvester also adds to the home’s water supply.

Taken in concert, Brunn’s efforts to work with nature’s elements not only birthed an arresting piece of architecture but also challenge those who visit to think about what the home of the future could be — one that doesn’t shout futuristic but is thoughtfully responsive to its environment.

It wasn’t easy, Brunn admitted. Working with a new structural system entailed training his crew from MODAA Construction to execute it.

“It turns out that building a bridge isn’t a small feat,” Brunn said. The home has five types of foundations, which all needed to be aligned. The architect doesn’t yet know if he’s succeeded. Because of certification requirements, it will take about 10 months of monitoring before Brunn knows if he indeed was able to build a zero net energy home, but at least he knows he’s taken as many steps as possible toward that goal.

“I think as an architect you owe it to the planet to build conscientiously,” Brunn said. “It’s like an oath. If a doctor has the Hippocratic oath, architects have to have that oath too.”